Navaratri – Celebrating the victory of good over evil


Navaratri is a festival dedicated to the worship of Goddess Shakti. The word Navaratri literally means nine nights in Sanskrit, nava meaning nine and ratri meaning nights. During these nine nights and ten days, nine forms of Shakti/Devi are worshiped. The 10th day is commonly referred to as Vijayadashami or Dussehra. The festival culminates with Dussehra, the victory of good over evil. The  beginning of spring and the beginnig of autumn are two very important junctions of climatic and solar influence. These two periods are taken as sacred opportunities for the worship of the Divine Mother. 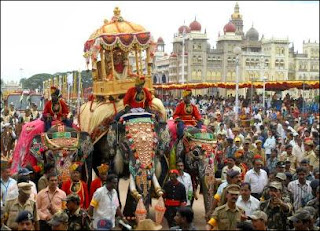 The dates of the festival are determined according to the lunar calendar.

Usually in late September/early October each year. This year, Navaratri starts on October 5 and ends on October 13.

The festival is celebrated all over India but in different ways. The traditional dances of Gujarat, known as garba and dandiya raas, are performed in circles with dancers dressed up in colorful clothes. Small, decorated sticks called dandiyas are used in the dandiya raas.

In Delhi, the feature of Navaratri celebrations are the Ramlila plays that take place all over the city. Towering effigies of the demon Ravana are burnt as part of these performances on Dussehra.

Over the course of the nine days, the Mother Goddess is worshiped in her various forms -- Durga, Lakshmi, and Sarasvati.

Each goddess is worshiped for three days in turn, starting with Durga who destroys negative tendencies. Next is Lakshmi who bestows good virtues and fortune, and last is Sarasvati, who instills wisdom and spiritual knowledge. The worship, accompanied by fasting, takes place in the mornings. Evenings are for feasting and dancing.

The Dussehra celebration of Mysore in Karnataka is a veritable extravaganza! Chamundi, a form of Durga, is the family deity of the Maharaja of Mysore. It’s a wonderful scene to watch the grand procession of elephants, horses and courtiers.