Baijnath Mahadev: The only Hindu temple built by an English couple in India –


Lord ShivaThe British ruled India for hundreds of years, and built many churches and cathedrals. But in the 1880s, a Shiva temple in Agar Malwa, Madhya Pradesh, was rebuilt by Lt. Col. Martin — the only temple ever made by an Englishman in India. 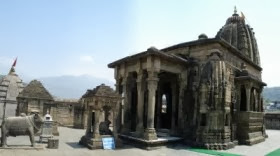 Col. Martin was in the Afghan wars. He used to regularly write to his wife, informing her of conditions there. It was a long war, and gradually the colonel’s letters stopped. Mrs. Martin, who then lived in the cantonment of Agar Malwa, was besides herself with grief, fearing the worst.
She would spend time riding for hours to calm herself. One day she rode her horse, past the temple of Baijnath Mahadev. It was in a decrepit state. It was the time of arti, and the sound of conches and the chanting of mantras compelled her to stop. She went inside to see the worship of Lord Shiva taking place. The priests saw the grief on her face and asked her what was wrong. Mrs. Martin narrated her sad story. The Brahmins told her that Lord Shiva listens to sincere prayers of all devotees and saves them from difficult situations. She was advised by one of the priests to start chanting the mantra: Baidyanath Mahadev Temple, Agar Malwa, M.P.“Om Namah Shivaya” for 11 days. The Englishwoman prayed to Lord Shiva for the colonel’s safe return, promising she would rebuild the temple if he came home safe from the war. On the 10th day, a messenger arrived from Afghanistan with a letter from her husband. It read, “I was regularly sending you letters from the battlefield but then suddenly the Pathans surrounded us. I thought there was no way of escape. Suddenly I saw an Indian yogi with long hair, wearing a tiger skin carrying a trident. He had an awe-inspiring personality and he started wielding his weapon against the Afghans who ran away from the field in fright. With his grace what was certain death our bad times turned into victory. Then the great yogi told me that I should not worry and that he had come to rescue me because he was very pleased with my wife’s prayers.”
Tears of joy and gratitude welled up in Mrs. Martin’s eyes as she read the letter. Her heart was overwhelmed. She fell at the feet of Lord Shiva’s image and sobbed. After a few weeks Lt. Col. Martin returned and his wife told him her story. The couple became devotees of Lord Shiva. In 1883, they donated Rs 15,000 to renovate the temple. This information is engraved on a slab kept in the Baijnath Mahadev Temple.
The Martins sailed for England with the firm resolution that they would make a Shiva temple at their home and pray to him till the end of life. And they did. – The New Indian Express, Chennai, Jan. 8, 2012
Posted by MANOJ KUMAR B at 1:45 pm