Was Brahmastra An Atom Bomb? 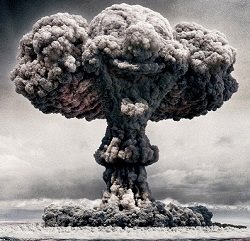 When Robert Openheimer, the chief scientist working for the Manhattan project, finally tested the experimental atomic bomb meant to put an end to the II world war, on a midsummer morning in 1945, he was left aghast. He had quoted a line from Bhagavat Gita, “I am become Death, the destroyer of worlds”. After seeing the effect of the explosion, several of the participant scientists signed a petition against its usage, but in vain.

But what if that fateful day on 1945 was not the first time the earth was assaulted by the shear cruelty of the atomic power?

What if Brahmastra, the most powerful and deadliest weapon described in the war epic of Mahabharata was also an atomic bomb?

The maha astra was said to be the creation of Lord Brahma, who envisaged its use to protect dharma and satya:

“… (it was) a single projectile
Charged with all the power of the Universe.
An incandescent column of smoke and flame
As bright as the thousand suns
Rose in all its splendor…”

The above is a passage from The Mahabharata, describing the immediate aftermath of usage of Brahmastra. The book contains several such descriptions. It says, the heat produced from discharging the weapon was so much that it resembled the fire of the sun during the time of cosmic annihilation.

The weapon also had severe environmental effect. The land became barren and all lifeforms in the area subsequently ceased to exist, as both human and animals lost the ability to reproduce.

The land developed cracks because of no rainfall and became draught stricken.

All these descriptions eerily resemble the aftereffects of atomic explosion. Not only a written proof, but there are also physical evidences of an ancient nuclear war.

During the archeological excavations of Mohenjodaro the largest known Indus valley civilization, in present day Pakistan, scientists found evidences that the city was wiped out by some sort of an atomic explosion.

The increased level of radiation, skeletons found scattered all over the city, many holding hands as though they all died at some horrible instant all point towards a possible nuclear wipe-out.

That the bodies were left unharmed by animals and an area where ground was covered with radioactive ash and fused sand particles were found, all are evidences of a possible atomic warfare in the past.

“Thus seeing the disturbance of the general populace and the imminent destruction of the planets, Arjuna at once retracted both brahmastra weapons, as Lord Sri Krishna desired.” - Srimad Bhagavatam 1.7.30-32

The question is, are we going to wait for Lord Krishna’s another reincarnation to tell us to put an end to this nuclear power mad race?
Posted by MANOJ KUMAR B at 1:43 pm