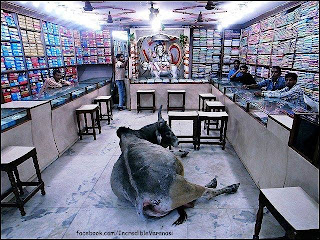 Twenty-five years ago, a bull walked into the Lucknow Chikan Shop, a cloth store tucked away in the dusty folds of Varanasi. It stayed on for half a day. Paramanand Chhugani, the shop owner, rubbed his eyes and scratched his head.

The next day, the bull returned and stayed put till the lights went out at 9 pm. Chhugani’s surprise took on the form of devotion. A devotee of Lord Shiva, the supreme deity of Varanasi, Chhugani decided that the bull’s visit was a sign from the Lord. By the third day, the bull had a name—Nandi Baba. “Outside every Shiva temple there sits Nandi (bull). I am a bhakt of Shivji so it was natural to name him Nandi Baba,” Chhugani told Open. “I am overwhelmed by his presence in my shop.”

Nandi Baba died. But other bulls followed, all named ‘Nandi Baba’ by Chhugani. The current incumbent is Nandi Baba the Fourth. Chhugani’s business has expanded since his first bovine visitor. In 2003, he opened a second shop, Lucknow Chikan Centre. It is mandatory for employees of both shops to pay obeisance to Nandi Baba IV.

Chhugani saw a divine hand even in the inauguration of his second shop. He spotted a Nandi in the vicinity and realised he had found his chief guest. “I kept the door open and waited,” Chhugani said. “Sure enough, Nandi walked into the shop. What’s more, it went straight to Shivji’s idol inside the shop. It looked at the idol for some time, then licked it. Afterwards it sat down at the foot of the idol. We couldn’t believe our eyes. Since then, Nandi Baba visits my shop every day.”

Nandi Baba is organised. It arrives at the shop at 9.30 am, except in the summer, when it waddles in half an hour later. The shutters are opened only after the bull reaches the shop. It walks in first and everyone else follows. Then, it walks up to the idol of Lord Shiva, licks it and sits down at its feet. The shop is cleaned even as Nandi Baba sits there. The area around the idol is cleaned only after it leaves the shop in the afternoon to stroll around the market. Chhugani ensures that it gets a sumptuous lunch. Post lunch, it returns and sits till closing time. Fearing that the bull will be inconvenienced if the shop is closed, Chhugani keeps it open every day of the year.

Shoppers in Varanasi are used to Nandi Baba’s presence. In fact, the shop has become a tourist attraction. People in Varanasi have anointed Nandi’s visits to the shop as a miracle. Sometimes, they flock there only to worship it. The Chhuganis do not turn back anyone who is keen to worship their Nandi Baba.

“We are blessed by Nandi Baba’s presence. How can we deprive other devotees of the pleasure of worshipping him?” —
Posted by MANOJ KUMAR B at 10:50 am